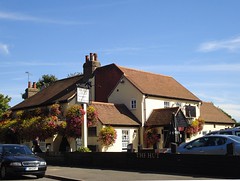 It's situated at the edge of a residential area near Hillingdon Hospital, at the corner of two cul-de-sacs and a fair distance from the nearest Tube or train station (though convenient for walkers on this section of the London Loop).

This open-plan pub has several different areas inside, wrapping around a central bar. The entrance from the car park leads into a games room with a pool table, a dartboard, a wooden floor, and a couple of seats. Further around the curve of the bar is the other entrance, which has two carpeted banquette seating areas on either side, one of which features a fireplace decorated with horse brasses, the other of which has a flatscreen mounted in one corner.

There were about half a dozen other customers inside when we arrived around 2:30pm (all of whom seemed to know each other), and more in the garden. Music was playing in one part of the pub, but at least vaguely audible throughout. The flatscreen was showing Paralympics coverage (wheelchair rugby) with the sound off.

According to their website as of September 2012, Thai and English food is available noon-3pm and 6pm-9:30pm Tue-Fri and noon-9:30pm Sat, while Sunday roasts are served noon-5:30pm Sun (no food Mondays). The website also warns that they do not serve any vegetarian dishes, and that none of the food can be guaranteed free of nut contamination. Photos of menu as of September 2012: p1, p2, p3, p4, p5, p6.

bob's verdict: I wouldn't travel to come here, but I'd be happy to have it as my local.

Accessibility: Access at the side is through a large car park with loose gravel; there's level access here but it's a bit tight. The front entrance, directly on Old Orchard Road, is also step-free and a bit less tight. Step-free access to the bar, seating, and toilets (including a RADAR-locked accessible one) once you're in. There's a step to get into the restaurant area, but the same food is served in other areas of the pub too. There's a small step/ridge to get to the beer garden, but no actual steps.