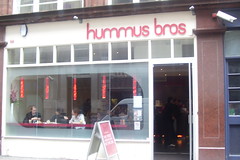 Hummus Bros was a cafe/restaurant in Soho, part of a small chain. It closed along with the other branches after the chain went into administration in mid-2018.

Hummous-based cafe/restaurant in Soho, apparently the first restaurant in the UK to concentrate on hummous as the basis of a meal.

Bec visited on a Tuesday in March 2008 for a takeaway lunch. The tables are picnic style, like in Wagamama, and there are only about four of them so you're likely to end up sharing with randoms. It was very busy when I went.

All meals are pita bread with hummous and a variety of toppings. I chose a Greek salad, which was fresh, crispy, and had plenty of feta cheese. It was served on top of the hummus, and the pitta bread was two small wholemeal pieces, which you then fill youself. At £5.20 this was a hearty and filling lunch at a good price.

They offer little pots of spicy lemon dressing and chillies for free, though I found the chillies to be a bit weak. The staff were very friendly and I'd love to go back to have an evening meal.

Kat visited with a party of eight on a Friday lunchtime in March 2009. We had no trouble finding space to sit together, although we had to spread over to the next table. The mushroom topping was a bit overwhelming for the (otherwise lovely) hummus, however the tabouleh side salad was excellent. The Aloe Vera juice was rather sweet but was a nice change to the usual selection of soft drinks.