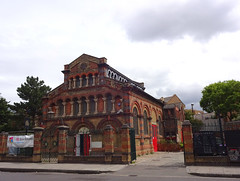 Cafe and bar located in a converted chapel on the west side of the Isle of Dogs. It also has outdoor seating at ground level, some of it under cover.

It's on the first floor; there's a performance arts space on the ground floor below. The room is long and narrow, with natural light peeking in from each end and at least four different types of artificial illumination, including fairy lights and chandelier-style lighting hanging from an unusual curved wood-panelled ceiling photo.

The walls are cream-painted brick behind various art prints, some of them for sale. A bar in the far corner has keg taps but no handpumps. Books are lined up along the front windowsill, available to take away for a monetary donation to the downstairs theatre or another book in return. There's a small pile of board games on a shelf by the bar.

Kake visited on a Monday lunchtime in June 2017. There were four or five other customers when I arrived a little before noon. Music was playing, not too loud.

I wanted to order the eggs florentine, but they were out of muffins so I went for a bacon and egg sandwich instead (£4.75) photo. The bacon was decent quality, thick-cut and not too salty. The egg yolk was soft but not runny, which is a reasonable enough choice for a sandwich. The bread was also thick-cut, and decent enough although a bit drier than ideal around the crust.

A cup of tea (£2) was made with a Teapigs bag, and came in a cup that felt a bit small for the price.

Service was friendly. Order at the bar and they'll bring your food to you. No service charge was added, and there was no obvious place to leave a tip.

Kake's verdict: It's a nice enough space, but the food and drinks feel a little expensive for what you get.

Accessibility: Uneven cobbled surface on the approach. It's on the first floor of the building, and although there's a lift it's not customer-operated; you have to go round to the performance space at the front of the building and ask the staff there to operate it for you. Toilets (including an accessible one) are on the ground floor — there doesn't seem to be one on the same level as the cafe. The non-accessible toilets are a bit of a squeeze.