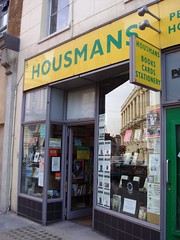 A very long-lasting radical bookshop, unconnected to any of the political parties, near King's Cross St Pancras Station.

This is one of the few general leftist bookshops still in existence, and the only one secretlondon knows which is not run by a particular organisation. The building is also home to Peace News newspaper, but the bookshop covers more than anti-war stuff. It has a large variety of socialist, Communist and anarchist books, newspapers and pamphlets and a large LGBT (Lesbian, Gay, Bisexual and Transgender) section.

Downstairs is the second hand Porcupine Books which is more classically leftist.