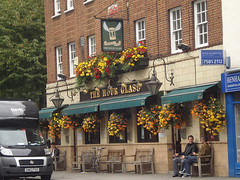 It's a small cosy space, with seating squeezed into the narrow strip between bar and front windows. Decor is traditional, with varnished floorboards, lots of dark wood, leather banquettes, low stools, glass lampshades, and a wooden bar gantry. A brick fireplace at one end looks original, but these days is fitted with a gas pipe. Newspapers sit in a rack for customers to borrow. There are several benches outside on the pavement.

Kake visited on a Thursday afternoon in September 2014. There were three other customers in at 3:30pm, and three or four more sitting outside. Classic rock music was playing quietly.

There were three real ales available on handpump: Tring Ridgeway, London Pride, and one other that I failed to write down in my notes. A glass of lime and soda (I asked for a half but I think it was bigger) was £1.15.

Accessibility: A small step to get in. No further steps to toilets.