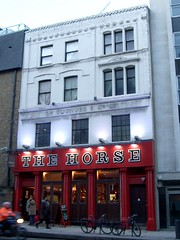 The Horse was a pub near Lambeth North Station. It closed in June or July 2013. By September 2013, a new business (with new owners) called the Horse & Stables had opened in its place.

A pub just by Lambeth North Station, with a striking name (though merely shortened from its name in a former life, The Horse & Groom).

The strikingly red-painted facade gives way to a bar stretching back fairly far inside. There's banquette seating and tables by the front window, and a more capacious area often booked out for office parties down the back. In the middle of the space is a vertiginous iron spiral stairway, which is kept roped off, in favour of a regular staircase along the wall (one less likely to cause accidents). It leads to an upstairs function room with plush leather furniture, a large mirror photo and a small bar area photo, which can be booked under reasonable terms.

The bar has a good range of spirits and wines, as well as three handpulls for ale. On a March 2009 visit, they had Tribute, Bombardier and Brains SA, but in May only one was on, and it ran out during the evening. The lager range features the usual suspects, as well as Staropramen.

Music is played (fairly loudly) downstairs, matching the raucous mood of the after-work office crowd that makes up the mainstay of the clientele, it seems. However, it's not a bad place by any means.

They have a Thai food menu (as well as one non-Thai main, "the Horse burger" for £7.75), which is served lunchtimes and evenings photo. On a May 2009 visit Ewan had the vegetable gaeng phet (medium-hot red curry, £6.25) with separate egg fried rice (£2.20), which did indeed have a pleasant spicy kick to it and was in general rather tasty. Other Thai dishes I've tried have been pretty good quality from this pub's kitchen.