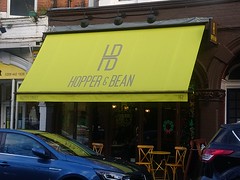 Café in Muswell Hill with a cheerful yellow theme.

It's essentially one long room, with a counter on the right-hand side and a very long table down the left-hand side. The counter has a display cabinet with variously-filled panini, various pastries, and some cake.

There is a mix of seating totalling around 50 places: some bench seating and a couple of armchairs, but mostly ordinary wooden chairs painted yellow. Apart from the very long table, there are a few other largish tables, plus a lot of marble-topped tables. There is yellow everywhere: the cups and saucers are yellow photo, as are the lampshades, the awning, and even the coffee machine.

Rowley Birkin QC visited on a Sunday morning in December 2019. There were I think five staff, outnumbering the customers initially, but more customers arrived throughout the morning. The music was at a very low level (mixture of easy listening/pop), and there were Sunday newspapers (Sunday Times, Observer, Mail on Sunday). For £7 I had two Cumberland sausages on toasted sourdough with beetroot hummus photo. An Americano was £2.40 and Earl Grey (leaf) was £2.50.

The have reasonable Wi-Fi (network: HBGuest; password on a board behind counter, but note it's lower case not upper case), stable though not fast (1.7 Mbps down). There are several sockets around.

Rowley Birkin QC's verdict: A good place to work — several other customers were working away on laptops for extended periods — with no annoying (to me) intrusions.

Child-friendliness: Several children were present during our visit. There is a baby changing tray in the spacious toilet, and there are high chairs (though without trays).

Accessibility: A very slight step to get in, about 1-2 cm, and once you're in it's level throughout and easy to manoeuvre around. There's a large toilet with grab bars, alarm, and a suitably low washbasin.