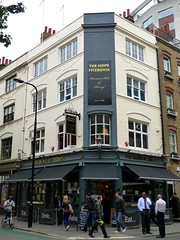 Small pub tucked behind Goodge Street Station, near Tottenham Court Road. It was previously known as the Hope photo, but was renovated extensively in 2012 and renamed to the Hope Fitzrovia. (For a description of it pre-renovation, see earlier version of this page.)

Note: According to Harden's it has been refurbished yet again since our most recent visit, so some of the details below may be out of date.

This corner pub is even smaller inside than it looks from the outside, though the large windows let in a reasonable amount of light. The decor is muted greys and browns, though some interest is added by a brick feature wall and another wallpapered with various London landmarks. Two flatscreens face each other across the room.

An L-shaped banquette flanked by varnished tables and low stools provides seating for about 15 people, while three tall tables along the front windows have tall chairs for a dozen more. Dark-varnished floorboards offer standing room in front of the bar.

There's another room upstairs, which used to be available to hire out; we aren't sure if this is still the case post-renovation.

Kake visited on a Wednesday afternoon in April 2016. The three handpumps on the bar were clipped for Lancaster Brewery American Hop, Woodforde's Reedlighter, and Gale's Seafarers. A pint of lime and soda was £1.50.

It likely gets much busier at peak times, but when I arrived a little after 2:30pm there were only three other customers. The flatscreens were showing football with the sound off, and music was playing, not too loud.

Food is served; as of April 2016 this consists mainly of burgers (menu photo 1, menu photo 2) and is served noon-3pm and 5pm-9pm on weekdays and noon-6pm on weekends.

Accessibility: Only a tiny step to get in, more of a ridge. However, the ladies' toilet is down three steps with narrow access and no handrail, and the gents' is down more steps, again with no handrail.