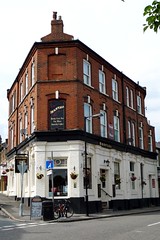 A former pub on the East Dulwich / Camberwell border.

Note: The pub closed for good on Sunday 23 December. The information below is retained for people who want to know what it was like.

It usually has between two and four guest beers on at about £2.80/pint (on our December 2007 visit they had three beers on with two to come). They have regular beer festivals - these include

They often have live music and comedy evenings at weekends. See website for details.

Has a couple of leather sofas.

They no longer serve food.