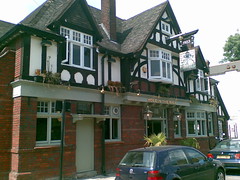 The Hole In The Wall was a gastropub in Chiswick, near the A4. According to Google Street View it closed down by May 2015 and was replaced by a restaurant called Smokehouse.

Gastropub in Chiswick near the A4. Inside, it's a typical gastropub with stripped wood floors and tables. They also have a garden.

bob went on a sunny lunchtime in May 2008 and enjoyed the garden. Quite a few other people had the same idea. They had Pride and Spitfire on. I had the fish and chips at £8. While the chips and fish were very good, the portion really was a bit small photo. I was reduced to eating the salad as well and still didn't feel satisfied.

bob visited again on a Tuesday evening in August 2008, along with co-workers. The Pride was OK. We had a couple of rounds of chips; the first ones were pre-salted, but we asked if the second round could come without salt and this seemed to work.