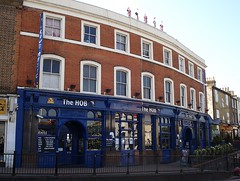 The Hob was a pub just across the road from Forest Hill Station. It closed in mid-2015. As of early 2017 the premises are occupied by The Signal photo, a craft beer pub run by Hippo Inns.

A pub just across the road from Forest Hill Station.

The internal space curves around, with a bar area opposite the main doors and some seating on couches with a few tables. There's a pool table up in the corner, and a sofa area with a flatscreen above. Another area opens out to the side, which on a Sunday when Ewan visited was set up for a regular art and crafts fair, with small stall tables for various local crafts people. There's a small beer garden at the side of the pub.

The walls are painted in dark colours, aside from one wallpapered feature wall and some exposed brickwork above the fireplace. It almost feels a bit Antic-like in terms of decor, though the quirkiness is less full-on here. Many of the tables are those annoying ones that you can't actually fit your legs under unless you have very slim thighs.

The bar has four handpulls for ale, and taps for a few lagers including Heineken, as well as bottled beers and ciders. On Ewan's July 2009 visit, the ales were Harvey's Sussex Best (£3.10/pint), Old Speckled Hen, and Adnam's Broadside, while on Kake's September 2012 visit they were Sussex Best (£1.85/half), Doom Bar, and Brakspears Oxford Gold.

When Kake visited on a Monday early evening in September 2012, there were only three or four other customers at 5pm. Staff were friendly and approachable on both our visits.

There's an upstairs function room which puts on regular comedy performances courtesy of the East Dulwich Comedy Club. It's a decent size, holding about 100, and has a separate smaller bar, with only two draught lagers (Kronenbourg is one of them) and a small range of bottled beer and a few spirits.

According to a sign seen in September 2012, a pub quiz is held on Thursday evenings and there's live music on various nights.

Accessibility: A step to get in, and more steps inside to get to different areas of the pub. The ladies' is a large cubicle with grab bars and an alarm cord, though it's not advertised externally as being an accessible toilet.