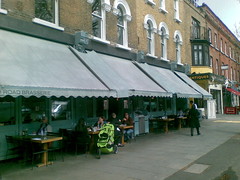 Bob visited on a Tuesday lunchtime in April 2008. It got relatively busy while I was there. I had the set lunch for £16. The mushrooms on toast were a bit dry, but the beef was fine. The dessert was okay. A bottle of still water is £3.50. I didn't get offered bread unlike everyone else, though I suspect the waiter was just being forgetful.