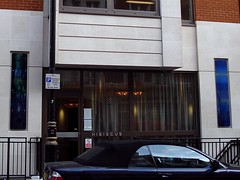 Hibiscus was a Modern European restaurant in Mayfair. It closed down in October 2016.

Previously based in Ludlow, the husband-and-wife team behind Hibiscus moved their restaurant to Maddox Street in Mayfair in October 2007 (shedding one of their two Michelin stars along the way, though they regained it in 2009).

Kake, doop, bob, and Ryan visited on a Wednesday evening in March 2008. We'd booked a couple of weeks in advance, and had no trouble getting our preferred time of 7pm. (Note that they require credit or debit card details on booking, though this doesn't have to be the card you actually end up paying with, and also that they ask you to give at least 48 hours' notice of cancellation.)

They have a small bar/waiting area at the front if you want to arrive early to meet the rest of your party; though we didn't take advantage of this as we'd decided to meet in the Windmill, a nice Young's pub just around the corner.

Service was very good; attentive and informative, and almost theatrical at times. We were kept well-supplied with jugs of tap water, decent bread, and excellent butter; and dishes were explained briefly and then expanded on if we showed particular interest. The sommelier in particular was great; young, enthusiastic in an almost chirpy way, and quite competent.

They offer a couple of tasting menus - the six-course "Tastes of Winter" (obv. this will change with season) and the seven-course "surprise menu"; we decided on the latter, and it was good. Kake worried a little during the first couple of courses that things were going to come too fast, but it turned out to be paced just right. (Although many early reviews mention being kept waiting for food, these problems appear to have been ironed out.)

Different members of the party liked different things. Kake was particularly keen on the pollack carpaccio, the foie gras ice cream with brioche emulsion, and the john dory; though I still don't understand what the rather annoying pomegranate seeds were doing in the foie gras dish. I was very pleased that the menu didn't include too much meat. The john dory was cooked exactly right, and I was quite amused by the accompanying gherkin-based sauce (no idea if it was meant to be serious or silly, but it worked either way). See Ryan's writeup for more details of our meal.

Although our evening was pretty expensive at £135/head, much of that was due to the wine - and they do a set-price lunch for £29.50 (as of December 2009; three courses, three choices per course), which for this level of cooking is an absolute bargain.