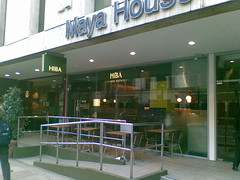 Hiba was a Lebanese restaurant on Borough High Street. It closed in mid-2011, to be replaced by a fish and chip shop according to LondonSE1.

Lebanese restaurant on Borough High Street. They do takeaway too, and offer online ordering and delivery via Hungry House.

secretlondon ordered a takeway via Hungry House in March 2010. It was expensive for a takeaway — restaurant prices, really. I had a mixed grill (£12) photo and a starter of batata harra (£5) photo. It was fine and high quality but I'm not sure it was worth £17.

Kake, bob, and doop have also tried the takeaway option a few times, most recently in October 2010. The only thing we've really been disappointed by was the bastorma (sliced smoked beef; £6), which was flavourless and rubbery. Jawaneh (chargrilled chicken wings; £5.50) had a beautiful char, and the meat wasn't at all dry. Foul moudamas (broad bean and chickpea stew; £5) was perfectly cooked, with nicely softened beans, no tough skins, and a gently lemony flavour. Moutabal baba ghanouj (smoked aubergine puree; £5) and bazenjan al rahib (chopped grilled aubergine with tomato, onion, and parsley; £5) were both perfectly textured and flavoured.

It's worth noting that they do various wraps, almost all priced at £4 as of October 2010; we almost always include one of these per person in our orders now, since they're the best way to try the main course/grilled meat options without spending too much money (see secretlondon's comment above). Kake likes the falafel wrap in particular; plenty of pickles included, and not dry at all.

We've also tried eat-in; bob visited in January 2008 and found the lamb shawarma was very tasty and the hummus was pretty good too. Overall, it was good food at a reasonable price.

An anonymous visitor (April 2009) tells us that they think this is one of the best Lebanese restaurants on the east side of London, and that they think the ambience is better than in other Lebanese places on this side of London because it's less fast-food style. Our anonymous friend adds that Hiba also offer Lebanese wine, and that "they follow original Lebanese recipes, which can sometimes be heavy if you are not used to it".