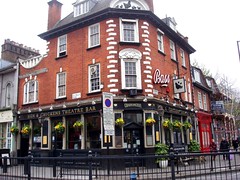 A pub on Highbury Corner, just near Highbury & Islington station, which hosts a theatre upstairs, specialising in comedy.

Despite the prominent and colourful branding outside, dating back to when the pub was owned by Bass Charrington, this no longer serves Bass ales. Luckily, however, there are no shortage of decent food and drink options, which combined with its prominent status on the London comedy scene, makes this is a popular and lively pub most of the time.

There are three handpulls on the bar dispensing London Pride and Bombardier, as well as plenty of draught lagers (Hoegaarden, Leffe and Paulaner among them) and ciders too (Aspalls and Addlestone's cloudy cider). There's a decent wine list as well, with house red being drinkable and only £11 a bottle (with special offers advertised on some nights).

On a Friday evening visit, the place is packed, though many people will head upstairs for the comedy when it starts (most shows have their doors at around 7:30pm-8pm). The few tables that exist for seating are quickly taken, though there's a bit of space to squeeze in alongside a standing table, with the occasional high stool available.

Food is served noon-3pm and 6pm-10:30pm Monday to Friday, 6pm-10:30pm Saturday, and 12:30pm-4pm and 6pm-10pm on Sunday. The menu itself is listed on a chalkboard at the back of the pub, as well as in leather-bound menus on the tables, and offers a reasonably interesting range of affordable and simple dishes, such as burgers, quesadillas, and the like.

The comedy nights here are well-known and it's worth getting on their mailing list if you're a fan, as a lot of high-profile performers do warm-up and practice gigs in the room upstairs, which holds only 54 people in raked seating, and tickets sell fast. (On the night we went, for example, Bill Bailey was doing a preview set for his new material.)