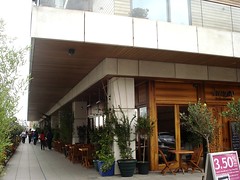 Turkish restaurant on the Isle of Dogs near South Quay Station.

Billed as a collaboration between London's two main Turkish restaurant chains, Haz and Tas, Hazev comprises a cafe/deli, a restaurant, and a bar, all located in a large open-plan room on the ground floor of a waterside residential block to the south of Canary Wharf.

The restaurant area is quite fancy; the tablecloths and napkins are thick white linen, an intricately-patterned rug decorates the hardwood floor near the entrance, and large windows offer views out onto the dock. A curtained-off private dining room is available near the back, and there's a fair bit of outside seating too.

Kake visited on a Monday lunchtime in September 2010. There were plenty of customers already in when I arrived around 12:30pm, and more continued to arrive during my visit, though there were always free tables due to the sheer size of the place.

A bread basket was brought as I sat down, along with a small dish of olives and a rather nice dill-scented dip that I think was based on strained yoghurt photo. The bread was good, warm and fresh, and sprinkled with sesame seeds. No charge was made for any of this, and I was given an entirely fresh bread basket later, when my food arrived (I felt this was a little wasteful, since I'd only eaten one piece from the first basket, but the waiter insisted).

Although they offer a reasonably-priced set menu photo, I decided to just have two mezze dishes rather than a more extensive meal. Zeytin yagli bakla (£4.35) photo, a cold dish of broad beans served with yoghurt, some decent olive oil, and a scattering of chopped red pepper, was pretty good; the broad beans were cooked and seasoned competently, and the red pepper added a nice textural and visual contrast. Patlican-biber kizartma (£5) photo was equally good; a hot dish of fried aubergine and courgette pieces topped with a well-balanced tomato sauce and arranged neatly around a dollop of cooling yoghurt.

Along with this I had a glass of black mulberry juice (£2.75), which made a nice change from the more usual kinds of soft drinks — they also have other interesting-sounding drinks on the menu.

The bill arrived with a few small cubes of Turkish delight and an auto-added 12.5% service charge. Service throughout was polite and efficient.

Kake's verdict: I'd certainly come back. I'd like to try some of their grilled meat dishes too, since they've been praised in other reviews.

Accessibility: Step-free to get in, and step-free through to the ladies' toilet at least, though the cubicles are a bit of a squeeze to get into.