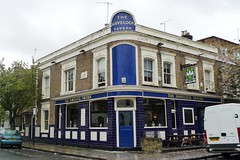 A gastropub in West Kensington, not far from Kensington (Olympia) Station, run by Capital Pub Company.

A pleasant light room with an island bar stretching down the centre of the space and tables around both sides, this still feels primarily like a gastropub. Clientele on a Saturday afternoon visit were largely families with children. However, there's a smaller room down the back of the pub, leading to the beer garden.

A large and prominent chalk board lists the menu, which is changed and redrawn for each service (Ewan spotted this taking place) photo of printed menu, Apr 2012. Food is served 12:30pm-2:30pm and 7pm-10pm Monday to Saturday, and 12:30pm-3pm and 7pm-9:30pm Sunday. Ewan tried a spaghetti with rabbit, peas, fennel and tarragon (£13.25) photo, which was perfectly cooked and very tasty, with flecks of tender meat (light and with only a hint of gaminess, more like chicken).

There are four handpulls for ale at the bar, with Sharp's Doom Bar, Sambrook's Wandle, Morland's Old Speckled Hen, and Adnam's Ghost Ship (£3.75/pint) on Ewan's April 2012 visit. Draught lagers include Budvar, Heineken and Meantime Wheat, as well as Stowford Press cider. The wine list is particularly prominent, and covers a good range.