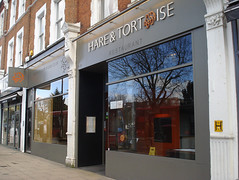 Cheap pan-Asian restaurant in Ealing, part of a small chain.

It's located in a small parade of restaurants very close to Ealing Broadway Station. The double shopfront suggests that it's quite spacious inside, and this is indeed the case, though with a rather unusual arrangement that has the kitchen on one side and the seating space stretching all the way back on the other. The decor is clean and modern, mixing pale wood with furniture and fittings in shades of cream and grey.

Kake visited on a Thursday afternoon in November 2017. There were a fair few people in even at the rather unusual time of 3:15pm, and more came in while I was there. No music was playing, but there was a good buzz of conversation.

I started with vegetable tempura (£5.40) photo. The batter was crisp, but a bit thick and too greasy. The vegetables were fine: mushroom, green beans, sweet potato, and green and red peppers.

Vegetarian sushi box (£8) photo contained three types of sushi: inside-out rolls with avocado, preserved radish, and asparagus; regular rolls (half with pickle and half with cucumber); and beancurd skin nigiri. The fillings were all fine; the avocado in particular had a good, non-mushy texture, and the asparagus was cooked perfectly. The rice was possibly just a touch overcooked, but only just, and the seasoning was good. Unfortunately the pieces of maki were all too big — in one case, so big it genuinely wouldn't fit in my mouth.

Service was efficient and friendly without being intrusive. No service charge was added to the bill.

Child-friendliness: They have at least two highchairs. There were a couple of children in during our visit.