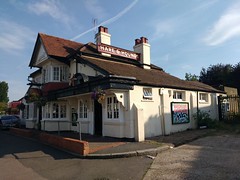 It's divided into three distinct areas inside, all with access to the central bar. The right-hand entrance door leads into what was likely once the public bar, with a dartboard and fairly utilitarian decor. The other two areas, accessed via the left-hand entrance, may once have been the saloon side, itself divided into two with the handpumps in the back part.

There's a large grassy beer garden photo, which according to the 2017 Good Beer Guide often contains a bouncy castle. Part of the garden is covered for smokers.

bob visited on a Tuesday afternoon in September 2016. Disappointingly, only one of the three handpumps was on, offering Marston's Pedigree (£2.90); this was drinkable as far as Pedigree goes.

Accessibility: Step-free entrance via a ramp, and level inside once you're in. The ladies' doubles as an accessible toilet. There's a shallow step to the beer garden.