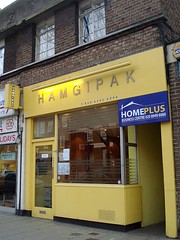 Hamgipak was a Korean cafe in New Malden. It closed down some time in 2018 and was replaced by another Korean place (with different owners) called Imone.

It's pretty tiny, with just three four-tops and three two-tops seating a total of 18 (though the four-tops have benches so you could perhaps squeeze six people onto one if they were all small). All items on the menu are given in Hangul (Korean script), transliteration, and English translations, though some of the transliterations are a little unusual (e.g. the dwen jang zzi ghe mentioned below is usually written as doenjang jjigae), and some of the translations may not be entirely accurate (e.g. the pickled vegetable/chwi namul mentioned below).

Kake, bob, and Richard visited on a Monday evening in August 2009. It was packed when we arrived at 7:45pm, but the lady in charge told us there would only be a couple of minutes wait for a table, and she was right. Most of the other customers were families with children of various ages, and by the time we left an hour later the place was empty.

Kimchi pancake (kim chi jun, £7) was crispy, non-greasy, and obviously freshly cooked, though it was a little bland in flavour and didn't really taste of kimchi. It may be worth trying the other pancakes in future — the seafood one is recommended on Chowhound (see link below).

Korean-style meat dumplings (man doo, £5 for six) were available fried or poached; we chose poached, and they were just fine; the wrappers were silky without being mushy, and the coarsely-ground meat filling was flavourful enough and neither fatty nor dry.

Sadly, they didn't have the (seasonal) pickled bellflower root we asked for, so instead we ordered a dish of chwi na mool (£2), which was erroneously translated as "pickled vegetable" — it in fact turned out to be a dish of seasoned and stifried small leaves. These were fine though, with a good but not overpowering savoury flavour.

Stir-fried octopus in hot spicy sauce (nak ji bok'm, £15 including noodles) was spicy enough even for bob, and a huge enough portion that even he couldn't finish it. The sauce had a good flavour as well as heat; the octopus was rather chewy though.

Bean paste stew with pork, tofu, and vegetables (dwen jang zzi ghe, £6 including rice and banchan) was good, though Kake was unable to find any actual meat in it. The tofu was fresh-tasting, though, and the broth was full of rich flavour. There were some lovely chewy bits of mushroom in it too. It came with four side dishes (banchan), all of which were good; pickled cucumber, beansprouts, kimchi, and sliced potatoes in a spicy sauce.

They're not licensed (though you can BYOB), so we had a couple of cans of Coke and 7-Up (£1.50 each) and a pot of green tea (£1.50, made with a teabag). Richard and bob were very taken with the sweets we were given at the end of the meal; this seemed to amuse the staff, who pressed handfuls of them on us to take away with us.

Our final bill photo was just over £18/head including a soft drink each. It would be easy to get away for much less; the octopus dish we ordered was one of the most expensive on the menu, and we had more than enough food overall.

Child-friendliness: As mentioned above, on our August 2009 evening visit, most of the other customers were families with children of various ages.

Accessibility: No steps to get in, but it's quite cramped inside. To get to the toilet you have to go outside and down an alleyway; we didn't check if there are steps involved.