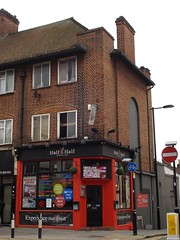 Now closed; was a bar in Croydon. As of October 2015 the premises are under refurbishment to reopen as a cocktail bar called South Beats.

The premises used to house the Beer Circus, and the current occupant has continued the policy of stocking interesting world beers, though the selection is far less extensive than before. However, the addition of two handpumps for real ale partly compensates for this.

When Kake and Ewan visited on a Tuesday late afternoon in August 2011, there were around 4 or 5 other people in. Music was playing. They had a couple of types of kriek in the fridge, a framboise, and some other Belgian beers. Options on tap included Anchor Steam, an American beer.

According to the 2011 Good Beer Guide, there's free wifi and a basement available for private parties, but no food.

Accessibility: A step to get in. Toilets are down a flight of stairs in the basement. The place is quite small and there's not much seating.