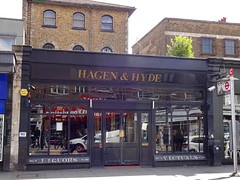 Antic pub in Balham. The pub is over several different floors and has a beer garden. secretlondon found it achingly trendy with fake ghost signs painted on a wall, singer sewing machines and other tat.

bob and Martin visited on a Wednesday evening in June 2015. There was ample space but still quite a few customers in. Beers available were Volden's Vim (£3.30/pint), Thornbridge Jaipur (£4.10/pint), Hophead, Cornish Coaster, and Sambrook's Junction. The beers were kept well. On secretlondon's July 2016 visit there were 8 handpumps. My first pint was rancid and cost over £4.

Accessibility: A small ramp to get in. Accessible toilet level with the bar. Other toilets down a flight of stairs. Steps to lots of areas of the pub. Steps to the garden.