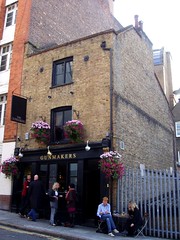 Note: It changed hands in late 2014, the previous landlord having moved on to the Finborough Arms in West Brompton. We haven't visited since, and so some of the below may be out of date.

There are seven handpulls, with regularly rotating beers and ciders. Beers are usually from London and Home Counties microbreweries, with Harvey's Sussex Best the only "house beer". All ales have always been very well-kept. There are also two keg taps offering imported Czech Budvar and Staropramen. A small bottled selection includes Bavarian and American craft beers.