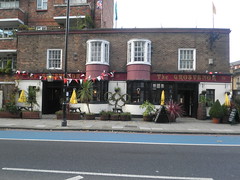 A locals' pub near the riverfront in Pimlico.

bob and [Jack]? visited on a Sunday afternoon in September 2009 at about 2pm. There were five people at the bar who were obviously locals, and a few people outside. It was also quiet on a December 2009 visit, with more than enough room for our pub crawl group of 20 or so, but this was an off-peak time of year.

The interior is a traditional pub style, carpeted with a few decent sofas. The bar is to one side of the room, with a pool table on the far side, and plenty of space on the other. They had Formula One on a TV screen with the sound at an okay level on the September 2009 visit.

There are handpulls for ale at the bar, with London Pride and Greene King IPA on. There's also the standard range of draught lagers.