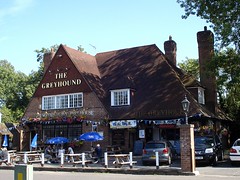 Pub alongside the common in Keston.

It has some picnic bench seating out the front, looking onto the common. The road separating the pub from the common is a reasonably quiet one.

Inside, the decor is traditional, with a swirly-patterned carpet and varnished dark wood. On entering, there's a public-bar-like area at the front to the left, and a more saloon-bar-like area further back and around to the right. The front bar has two flatscreens at the end and a long banquette facing the bar itself, with tables set along it and chairs facing; there's a small amount of standing room between this and the line of stools at the bar.

More tables and chairs are available in the seating area further back, including some on a dais (on our September 2012 visit, these were pre-set with cutlery). A door leads out from here to the top part of the garden; a covered area of decking with some chairs and tables. Steps then lead down to a paved area with picnic benches, which gives onto a grassed-over play area with two slides joined by a plank bridge, two swings, and a couple of spring bouncers.

Kake visited on a Tuesday afternoon in September 2012. The flatscreens in the front bar were showing sport with the sound off initially but later switched on. Music was playing throughout this, fairly quietly. When I arrived around 2:30pm there were a handful of other customers in the front bar, several more (plus four or five children) in the garden, and a few others sitting out the front facing the common.

According to their website as of September 2012, food is served noon-9pm Mon-Sat and noon-6pm Sun. See photos of the menu as of the same month: page 1, page 2, page 3. They also have a board behind the bar with a few specials, which on our visit included ribeye steak, rabbit pie, and grilled dover sole.

Accessibility: To get in, there's a small (kerb-height) step, then a little further along a ramp (temporary/removable), and a ridge at the threshold. Once you're in, it's step-free to the bar, some of the interior seating, and the toilets. There's a step to the top decking of the beer garden (the covered part) and further steps (with a sturdy rail on one side) down to the paved area and children's play area.