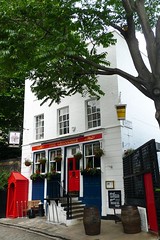 Taylor Walker pub tucked away down a mews in Belgravia.

Entry is into a small bar area with very little seating; no actual chairs, just a few tall stools and three tables with smaller stools arranged around them, and a narrow, rather high, padded bench. Two further rooms at the back are reserved exclusively for diners. There are a couple of benches out the front facing the mews, along with a small roped-off standing area.

The front bar has a varnished dark wood floor, while the dining rooms are carpeted. A few bits of paraphernalia hang from the ceiling, which is papered with various currency notes. An open fire is covered with a fire guard, with a fire extinguisher displayed prominently nearby.

One notable aspect is the pewter bar top; on our visit, one of the other customers asked about it and was told that it was one of the few remaining examples of the breed. There are also some old-style handpumps along the bar, though these merely conceal keg taps and are not in use; two more modern pumps sit on each side to dispense the real ales.

Kake visited on a Friday afternoon in September 2012. There were four ales on handpull: Timothy Taylor Landlord, London Pride, Woodeford Wherry, and Courage Directors. A pint of lime and soda was £1.48.

No music was playing. There were three or four other customers in, speaking in hushed tones. Service was rather perfunctory, though I did later see one member of staff being rather more chatty with a couple of other customers who were drinking the real ales (I was on the lime and soda due to the hot weather and the early hour).

Free wifi is available via The Cloud; you just need to give them an email address and a few details, and as of September 2012 the form happily accepts junk data.

According to their website as of September 2012, food is served noon-10pm Mon-Sun from a standard Taylor Walker menu.

Kake's verdict: I didn't feel particularly welcome here, and the lack of seating would also put me off coming back, particularly as it's not all that far from the Star.

Accessibility: Several steps to get in (with a sturdy handrail on one side). The road and pavement outside are quite uneven. Once you're in, there are two more steps to the ladies', with no handrail.