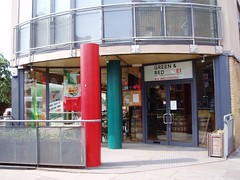 Green and Red was a Mexican restaurant and bar in a modern building just by the top of Brick Lane. It has now closed.

As of early 2011, the premises were occupied by Mason and Taylor, a new bar from the people who run the Duke of Wellington in Dalston, but this has now closed in its turn.