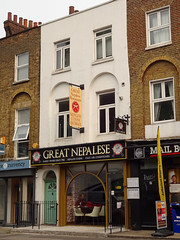 Kat, Bec and others visited on a Tuesday evening in June 2009. It was fairly quiet and there was no trouble seating a party of 7. We opted for starters instead of poppadums - as well as the usual pakoras/samosas there were lovely steamed dumplings (vegetarian and meat) on offer.

The Great Nepalese has a reputation for its Nargis Koftas (scotch egg curry), which one of our party heartily enjoyed on our visit. The Pork Bhutuwa was also very tasty.

London Pride is available for £4.25 a bottle but for the same price the Kathmandu lager is worth a try.

The decor mainly consists of framed glowing reviews of the food (well-deserved) and slightly disparaging comments about the location (a little harsh, perhaps).

Accessibilty: toilets are down a flight of stairs.