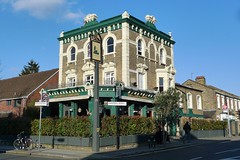 Pub in East Dulwich. It's part of a small chain that also includes the Aeronaut in Acton and the Old Nun's Head in Nunhead.

It's quite large inside — a high-ceilinged room surrounded by large windows and filled with mismatched chairs and tables. A piano stands in one corner, next to a pile of board games. Past the bar, a door leads out to a beer garden at the back. Further outdoor seating is provided by several picnic benches in a stone-flagged area that stretches around the front and side of the pub, divided from the pavement by a low wall. (A sign warns that no drinks are allowed in this area after 10:30pm.)

Kake and friends visited on a Friday lunchtime in September 2015. Arriving at their opening time of noon, we were the first customers, though one other turned up about half an hour later. Music was playing, not too loud.

Three of the five handpumps were on, offering Sambrook's Pumphouse, Sambrook's Junction, and Laine's Best. A pint of lime and soda was £1.20.

Kake tried the feather steak and rice noodle salad (£8.50) photo. It was good, enlivened with lime juice and fresh mint leaves. The vegetables (thinly-sliced radishes, carrots, and mangetout) seemed to have been lightly cooked and were perhaps a little soggy, but this didn't really detract from the dish. The steak was very competently cooked, not at all overdone, and a generous portion.

Child-friendliness: They have at least three highchairs. Dishes that can be made in child-sized portions are marked on the menu; on our visit there were two of these, namely a burger and fish & chips. They told us they also have other children's dishes, but we didn't ask for details.

Accessibility: A ramp followed by a step to get in. Another step to the toilets.