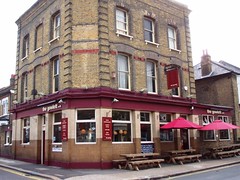 Pub in Peckham (or East Dulwich borders, if you prefer, as the publicans appear to do).

It closed down in November 2017, and was squatted briefly, but reopened a few months later with the previous general manager as the new tenant.

Some of the details below may be out of date following the closure and reopening, but when Rowley Birkin QC visited in April 2019 they were still doing real ale (Harvey's Sussex Best was one) and stonebaked pizzas.

There are two sides to the pub, with large tables and leather banquette seating around one side, and deep low couches, a DJ booth and pool table on the other. There's a beer garden/smoking area out back with some very long and very sturdy wooden tables. The space inside is often filled with families at the weekend. Staff are friendly and helpful, and service is attentive.

On tap are a number of ales, with a regularly changing rotation (it's a real ale favourite for the area). In June 2009, these were London Pride, Spitfire, Brakspear Bitter and Harviestoun Bitter & Twisted, though Deuchars IPA has also been available in the past. Upcoming ales are listed on a chalkboard behind the bar. The pub also has Hoegaarden and Leffe as well as other premium (and cooking) lagers on tap.

Stone-baked pizzas are cooked to order photo of menu in June 2009. Food is served 12:30pm-2:30pm Tuesday to Friday and 6:30pm-10:30pm Monday to Friday, 12:30pm-10:30pm Saturday, and 12:30pm-9pm Sunday. The pizzas are absolutely lovely, made on the premises, with big crispy crusts and tasty ingredients (most are about £8). The fiorentina is as tasty as any, and the menu asks you to specify how you want the egg in the middle cooked, which is a nice touch photo. Staff offer chilli oil and pepper as a matter of course. Ewan can highly recommend the pizzas. There's a couple of desserts as well, and Ewan's warm nutty chocolate brownie served with a scoop of icecream (£4) photo was tasty and not too heavy.

There are various regular events: