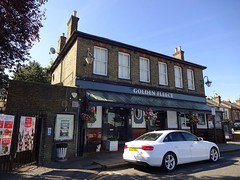 The interior is a decent size, but much of it is filled with the large curved bar, and the rest is broken up with pillars and room dividers, so the overall impression is more of a series of cosy hideaways. The floor is bare boards, and the seating a mix of high stools, scuffed-paint wooden chairs, and padded banquettes. Vintage photos of the local area hang on the walls, and a dartboard is mounted in one corner.

At the front there's a covered veranda with four picnic benches, overlooking Wanstead Flats (though a rather manicured part of it, with close-cropped grass and several sets of goalposts). Out the back is a large beer garden with picnic tables, a grassed area, a slide and climbing equipment for children, and a covered shelter for smokers.

Kake visited on a Monday morning in September 2019. I was the only customer at their opening time of 11am. Music was playing, rather perky for the time of day, but not too loud. Service was friendly and welcoming. The six handpumps were clipped for four real ales: Sharp's Atlantic, Truman's Captain Lockwood, Abbot Ale, and Greene King IPA. A pint of lime and soda was £1.06.

Kake's verdict: I liked this one and would happily bring kids here on a sunny day. As noted by a Pubs Galore commenter (see link below), one could be forgiven for mistaking this for a country pub.

Child-friendliness: There's play equipment in the garden, and they have at least one highchair with tray. The managers themselves have a small child, who was present on our visit.

Accessibility: At the front entrance there's a step to the veranda and then another step from there to get in, but there's (somewhat roundabout) step-free access via a ramp in the beer garden at the side. Once you're in, it's level to the seating, bar, and one set each of gents' and ladies' toilets.