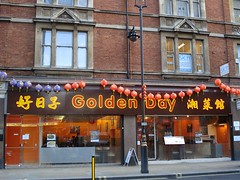 Golden Day was a Hunan restaurant on Shaftesbury Avenue in Chinatown. It has now closed.

As of February 2015 the interior has been stripped out, and there's a sign (in Chinese) photo stating that the restaurant and its chefs have moved to Oriental Dragon, 31 Gerrard Street.

Hunan restaurant on Shaftesbury Avenue in Chinatown. It opened in early 2010 on the site previously occupied by Chinese Experience. Its Chinese name is 好日子 (hǎo rì zi), which literally translates as something like "auspicious day".

Kake and nine friends visited in June 2010. We'd booked in advance, and were seated in a slightly more private booth area at the back of the restaurant. Because of the size of our party, we managed to try a fair selection of the menu — around 14 dishes — and it was all good. Smoked pork with white pepper and leeks (白椒臘肉/bái jiāo là ròu; £9.50) photo was one of the standouts, with an excellent smoky flavour to the meat and a pleasing texture too.

Hunan-style mashed aubergine (擂蒸茄子/léi zhēng qié zi; £6.80) photo was smoky and soft, and had a good seed-free texture. A dish of hand-torn cabbage (手撕包菜/shǒu sī bāo cài) photo was perfectly cooked, neither too crisp nor too soggy.

Arriving last was the most spectacular of our dishes — sliced steamed fish with chillies and garlic (香辣片片魚/xiāng là piàn piàn yú) photo. The presentation was great, with head and tail set at either end of the platter and cucumber "scales" running along each side. The fish had a lovely texture too.

On another visit a month later, we tried the sundried green beans with pork (曝豆角炒肉; £8.50) photo, Xiangxi-style dry-pot duck with baby ginger (乾鍋湘西仔姜鴨/gān guō Xiāngxī zǐ jiāng yā; £15.80) photo, and steamed seabass with home-made chilli paste (剁椒蒸鱸魚/duò jiāo zhēng lú yú; £16.80) photo. The flesh of the fish was softer than that of the steamed fish we had last time, and Kake didn't enjoy it quite as much, but the rest of our party thought it was fine.

Accessibility: A largeish step up to get in. Toilets are down a flight of stairs with a couple of bends.