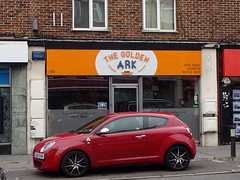 bob's verdict: My go to pub in the Croydon area if I want to drink some interesting beers and have a pleasant afternoon.