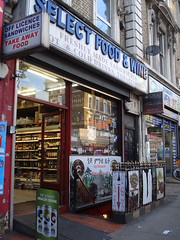 Located in a basement underneath a convenience store, it may not look too promising at first glance. However, once down the somewhat rickety staircase, the space itself is quite cosy. Walls are panelled with wood, and decorated with abstract and figurative art. The floor is tiled, the ceiling is low, and an incense burner smoulders near the entrance.

There are two rooms, each seating about 30 people at small varnished wooden tables, plus three tall stools at the bar in the front room. The back room is only open on Fridays, Saturdays, and Sundays. They have wifi; get the password from a member of staff.

Kake visited on a Thursday lunchtime in March 2015. It was before their official opening time of 1pm, but they were just unlocking the door as I arrived around 12:15pm, and they were happy for me to come in. Music was playing, quite loud at first, but turned down after a while. I was the only eat-in customer throughout my visit, but a couple of other people arrived to buy takeaway injera while I was there.

I went for the ye-tsom beyaynetu (vegetarian selection; £8) photo. The menu listed this as including five different dishes, but I actually got eight, mainly pulse-based, some hot and some cold, all served on a large injera. Gomen wot (sauteed dark greens with onions) had a lovely texture and flavour; they'd used greens sturdy enough to stand up to extended cooking. Although there were five pulse-based dishes, including shiro wot (made from ground chickpeas), misir wot (spicy red lentil stew), and azifa (lentils with mustard, served cold), they were all quite distinct from each other.

It was more than I could eat, and they offered to pack up the leftovers for me to take away (though I had to decline as I wouldn't be going home for several hours).

Kake's verdict: I'd happily come back, though I worry slightly about noise levels in the evening.

Accessibility: Access is down a steep, narrow staircase with a thin handrail on one side. The toilets are tiny.