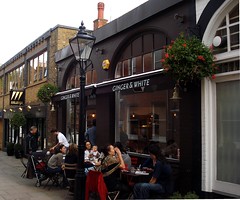 Independent coffee shop in Hampstead, with another branch in Belsize Park.

They proudly proclaim themselves to be a British coffee shop, and their website asserts that they "don't do Grande". A large picture of the Union Jack is mounted on the wall inside, to emphasize the point (and yes, they did get it the right way up). Coffee is supplied by Square Mile, and their jams, relishes, butter, cheeses, meats, etc are all from British suppliers.

The decor is light and bright. Entrance is into a narrow room with a service counter and cake display, while the seating area is in a slightly larger space on the right, dominated by a ten-seater communal table. A three-seater sofa is tucked into one corner and an armchair into another, and there are half a dozen more seats along a counter that looks out onto Perrin's Court. Several tables are set outside on the pedestrianised court itself.

Kake, Ewan, Sarah, and claud visited on a Thursday afternoon in September 2009. There were about ten people sitting outside and slightly fewer inside. We managed to bag the sofa, and pulled up a stool to go with it. Between us, we tried a fair selection of the drinks menu photo. Kake had the silver needle tea (£2/pot), made with a bag from Jing tea; it wasn't bad, but I'm pretty sure they gave me the jasmine version rather than plain silver needle — not a huge problem, just not as advertised. Claud had the Montezuma's hot chocolate (£2.90), which was charmingly accompanied by a kilner jar full of tiny marshmallows for sprinkling on top. Ewan was pleased with his cappucino (£2.30) photo.

We also tried the cakes; Ewan had a slice of ginger cake photo and awarded it top marks. Sarah tried a cupcake photo, which also went down well.

The child-friendliness of the place was obvious, with Spot The Dog books scattered around and coloured pencils stacked in jars on the ten-seater communal table that fills most of the seating area.