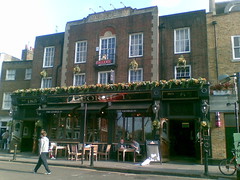 Six handpumps; in April 2008 these had London Pride, Chiswick, Discovery, ESB, London Porter, and Festival Mild. Bob has visited on a number of occasions now; cask London Porter has been available on three visits spread throughout the year, so it looks like it's a regular (it was priced at £3.20/pint in November 2008.)

The menu is that of a typical Fuller's Ale and Pie House (though without the pie tasting platter that we've seen at other such places). Bob had lunch here several times. photo. All of the food has been pretty good. I've personally had the scampi, several of the pies and the burger.

They put on comedy in the upstairs room on Friday and Saturday nights. This room is bookable on other evenings.

They have a beer garden and at least two real open fires. On Bob's Friday evening visit (about 6pm) there were still some seats available, though not many. There were plenty of staff on.

There is now free wireless. Password changes every week. It is however displayed prominently above the bar.

Accessibility: Step-free access through the right-hand entrance (there's steps at the left-hand one), and step-free through to the bar, seating area, and toilets. There's an accessible toilet.