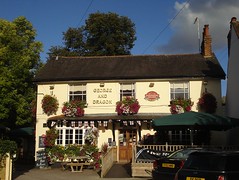 The interior is traditional, with the front part of the interior dominated by the bar, though there are a couple of nice window seats too. The back room has more seating at close-packed rectangular tables. There's plenty of outside seating too, some of it covered (the 2012 Good Beer Guide says there's a heated, covered smoking area with a TV).

Kake visited on a Tuesday early evening in September 2011. There were quite a few people in when I arrived a little after 5pm; some quietly reading the paper, others chatting in groups. No music was playing, but there was plenty of conversation. Three real ales were available, all from Shepherd Neame: Late Red (£3.45/pint), Master Brew, and Spitfire.

According to the 2012 Good Beer Guide, there's live jazz on Tuesday evenings.

Accessibility: A long ramp up to the front entrance. Not sure about toilets. There is a car park.