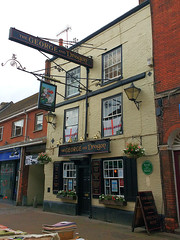 The building is the original premises of the George Inn, a coaching inn established in 1715, and is Grade II listed by merit of its historic and architectural interest. The interior is traditional, with a low whitewashed ceiling and exposed black-painted beams, and there's a dartboard towards the back.

The floor is mostly carpeted, and the dark wood of the panelled walls is carried through to the tables and church-pew-style padded banquettes. Wooden pillars and room dividers break up the space, offering a few cosy corners to hide away in. There's a beer garden out the back, and according to the Morning Advertiser website (page no longer there), there's a function/dining room on the first floor.

Kake visited on a Thursday afternoon in October 2009, just a couple of days after it reopened following refurbishment and change of management. Two of the three handpumps were on, offering London Pride (£1.45/half) and Adnams Bitter. There were about half a dozen other customers in, all clustered around the bar and engaging in friendly banter. Music was playing (Stevie Wonder etc), though not too loudly.

On another visit on a Wednesday afternoon in September 2015, there were three other customers in when Kake arrived around 3:30pm. The flatscreens were showing Sky Sports News with the sound on, occasionally interrupted by piped music, possibly from a jukebox. The three handpumps offered Bombardier, Sharp's Doom Bar, and Old Rosie. A pint of lime and soda was £1.

According to a menu seen in September 2015 photo, food is served noon-2pm Mon-Fri.