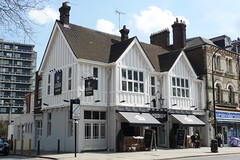 A Spirit Pub Company pub near Belsize Park Station, refurbished in 2013 from its Taylor Walker brand photo to a new (unnamed) 'premium' sub-brand.

It's fairly big inside, and there's a beer garden (patio) out the back too. Large open windows let light in at the very front and back, and inside the decor is dominated by blond wood panelling and floors photo, lots of lights and light-coloured surfaces to help improve the previously rather dim lighting. At the front of the pub is a range of plush leather couches and chairs with low tables in a mock library decor photo, while the rear is kept laid out as a dining room.

There are two sets of four handpulls on either side of the long bar, with each set offering Timothy Taylor's Landlord, Thwaites' Wainwright, Sambrook's Powerhouse Porter and Windsor & Eton Windsor Knot (£3.85/pint) on Ewan's April 2013 visit. In July 2013, the ales were Timothy Taylor's Landlord, Tring Blonde, Hackney Brewery Best Bitter, and By The Horns Diamond Geezer, and they had Old Rosie cider on as well.

There are also a few decent keg beers, including Pilsner Urquell, Camden Town Hells, BrewDog Punk IPA and Peroni, amongst others. Further bottled beers are available from a prominent fridge behind the bar, in a decent range of different styles from across the world. They have an interesting range of soft drinks photo of menu. A pint of lime and soda was £1.10 in July 2013.

There is a table of daily newspapers set out near the front door, and some flatscreen TVs high up on a few of the walls. According to a sign seen in July 2013, there's a quiz on Mondays at 7:30pm.

On Ewan's April 2013 visit, fairly unchallenging music was playing not too loudly, and the flatscreens were showing sport but without the sound. On Kake's early Friday evening visit in July 2013, the music was just a little too loud for comfortable conversation, and there were quite a few people in at 6pm, but some tables were still free. Service was very friendly on both our visits.

Prior to its refurbishment, in October 2011, food was served noon-9pm Monday to Sunday, which is likely to have remained unchanged. The menu focuses on pub classics like burgers, as well as Sunday roasts, and there's a weekend brunch menu served until noon. They also have a bar snack menu photo. In April 2013, Ewan tried a burger and chips (£12) photo, and staff asked how it should be cooked. Despite requesting medium-rare, it was barely pink inside photo, but still fairly tasty, in a brioche bun; the chips were also quite good, though there weren't many of them.

Accessibility: No step to get in, and it's step-free through to the toilets (though there are two heavy doors on the way to the ladies' at least, and access to the cubicles is a little narrow). There are steps to the beer garden.