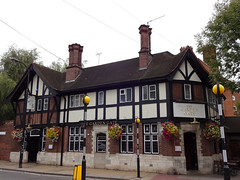 The decor is on the elaborate side, with stained-glass windows, a chandelier to one side, and beaded lampshades hanging above the bar. Flowers in small bottles sit on the tables along with thick white candles. The floor is worn hardwood, and the walls are woodpanelled. There's also a beer garden, including a covered area.

Kake visited on a Monday afternoon in October 2011. Five of the six handpulls were on, offering Rooster's Wild Mule (£1.80/half), Stonehenge Ales Eye Opener (£1.80/half), Lancaster Blonde, Harvey's Sussex Best, and Sharp's Doom Bar. The staff member who served me didn't seem to know all that much about real ale, but was keen to try and help me choose one (though no tasters were offered). The ale was served in elegant little stemmed half-pint glasses.

Drinks menus on the tables offered many other options, with five different gins (including Sipsmiths), and bottled Belgian and American beers. There were also a number of lager fonts on the bar, with options including Veltins, Kozel, Peroni, and Vedett Extra White.

Music was playing, a bit on the easy-listening side at times. There were about half a dozen other customers, all women, one with a baby and one with a laptop.

Food is served, possibly all day; see photos of menus as of October 2011: Sunday menu, prix fixe menu, sandwich menu. There were also some interesting bar snacks chalked up on a board behind the bar: edamame, whitebait, salt and pepper squid, panfried chorizo, and sweet potato wedges with tarragon mayo. I tried the sweet potato wedges (£4) photo, which initially looked a fairly miserly portion for the price, but turned out to be quite substantial. They were also pretty good, not soggy at all (which is often hard to avoid with sweet potato), and seasoned just right.

Kake's verdict: I liked it here and would come back both for drinks and for food, but then I do like the pubs in this sub-brand in general. Judging by my experiences at other places in the chain, though, it may be best experienced off-peak, when it's not too busy.

Accessibility: One of the entrances has a step, but the other is step-free. Level access to the bar, seating area, and toilets once you're in (not sure about the beer garden). Two of the cubicles in the ladies' have doors that open outwards, and there's also a separate accessible toilet.