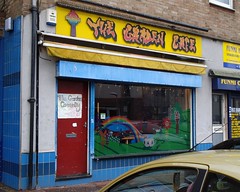 The interior is bright and colourful, with eclectic decor including a display of decorated acoustic guitars and a "graffiti wall" made from large sheets of paper. An upright piano sits against one wall, and a shelf of books stands near the front window photo.

It's fairly small, seating 18 at upright chairs and tables, plus 4 on high stools at a small counter photo, and more on a couple of comfortable sofas arranged at right angles around a coffee table photo.

The cafe is associated with the Ascension Community Trust, a Christian organisation, but the religious aspect is kept fairly subtle; the most overt clue is the Christian posters in the loo. Community spirit is more obvious, with a food bank donation box and a pinboard with tokens for suspended coffee/sandwiches.

Kake visited on a Monday lunchtime in February 2014. There were a few other customers when I arrived, and a few others wandered in and out while I was there. Everyone except me seemed to be regulars. Music was playing, not too loud.

I went for the daily special of vegetable stew and rice (£3.50) photo. It was a good-sized portion for the price without being oversized or overfilling. The rice was a bit "easy cook", though there was plenty of it. The stew included tomatoes, courgettes, carrots, celery, and potatoes, and was tasty enough while remaining firmly in the arena of basic home cooking.

Kake's verdict: A good option for affordable food if you're in the area on a weekday lunchtime.

Accessibility: A step to get in. A commenter on this page tells us that a ramp is available, but it's unclear how one gets access to this from outside. The toilet is an accessible one with grab bars and an alarm cord.