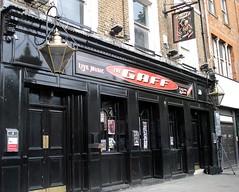 Now closed; was an alternative music pub on Holloway Road. As of February 2011, Pubs Galore reports that the premises are occupied by a branch of Costa Coffee.

An alternative music pub on Holloway Road, near the Nag's Head intersection with Seven Sisters Road, not too far from Holloway Road Station, formerly a locals' pub called The Old King's Head.

Inside, the decor is very much in the Eerie Pub vein, with fake cobwebs, coffins, skeletons and the like lining the walls, and dark, red lighting. However, staff are friendly and the place is a reasonable venue for live music, which they put on fairly regularly (so there may be a cover charge to enter).

The stage itself is at the front of the pub, by the door. A few large tables line the wall behind the entrance, opposite the bar. In the rear of the pub, only partially in view of the stage, is a larger room with seating around the outside and a DJ booth in the corner. On a Wednesday evening in March, the place wasn't too busy, with plenty of room to sit.

There are five ale handpulls on the bar, though only three appear to be in regular use, all featuring Wells ales. Of these, two were off on a March 2009 visit (Bombardier and Eagle IPA), though Bombardier Burning Gold (£2.90/pint) was fine. They also do the standard range of lagers, including Amstel, and wine (not particularly great quality).