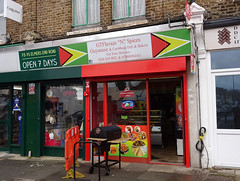 Guyanese takeaway and bakery in Anerley, just up the road from Birkbeck Station. They also do delivery, with online ordering via Just Eat, but it's recommended to ring up instead of ordering online since the availability of the menu items varies.

It's a small space, squeezed into a narrow shopfront. There are a couple of small tables for eat-in at the front, with service from a display counter behind. A jerk chicken grill stands outside on the pavement.

Kake has visited for takeaway twice now, in March and June 2018. Service was friendly and helpful, and the staff member on duty was happy to explain various aspects of Guyanese food to me and recommend different dishes. Both times they had a bit of trouble locating change, so it might be worth making sure to take plenty of coins with you.

Cassava ball (£2 in March 2018) photo, a fried cassava-based dumpling stuffed with a whole boiled egg, was pretty good. The egg had a dark ring around the yolk but was fine aside from that, and there was a good balance between dumpling and filling. This went very well with the accompanying fruit chutney, which had a clear fruity flavour but wasn't too sweet and had a good savouriness.

Pepper pot (£6 in March 2018) photo was somewhat too sweet for my taste, but the meat in it — oxtail, cow foot, and other such items — was flavourful and tender enough to cut with a spoon. The sauce was rich and plentiful, suitable for mopping up with the dense, cake-like Guyanese bread served alongside it (this was also a little sweet for my preference).

Black pudding (£5 in March 2018) photo was really interestingly spiced, and the texture was interesting too, with a chewy exterior skin giving way to a crumbly rice-based interior. Spinach (£3.50 in March 2018) photo had a good texture; soft but not overcooked. It was quite salty on its own, but eaten with plenty of rice it was fine.

Roti with curry mutton (£6 in June 2018) photo was a little disappointing; I'd been expecting a thin, flexible flatbread wrapped around the curry mutton, but instead the mutton was served in a separate tub alongside a thick, crumbly, and overly rich roti. The curry mutton was fine in itself, with a good flavour and nicely soft meat, but the roti was so plain and stodgy that I only managed half of it.