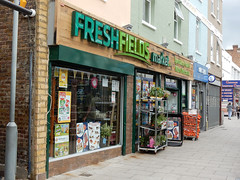 Supermarket and off licence in central Croydon, associated with The Wine Cellar in Sanderstead.

Fresh Fields Market sells fresh fruit and vegetables, as well as a variety of groceries from around the world. Though the selection is more limited than specialist grocers you can find Eastern European, African, and South and East Asian foods here.

They also stock a broad selection of beers including craft beers, bottled ales, and beers from around the world. Their selection of beers from smaller London breweries is particularly good. Many of their beers are available from the fridge where appropriate. When Robbie last visited in September 2015 there were even a couple of beers from New Zealand on the shelves. They have a long-running promotion giving a 10% discount when you buy six or more beers.

They also usually have a cask of something from a reasonably local brewery set up, and advertise frequent beer tasting and 'meet the brewer' events.

Accessibility: There is level access from the street and throughout the store. Some of the aisles inside are on the narrow side, but the path to the beer is fairly broad.