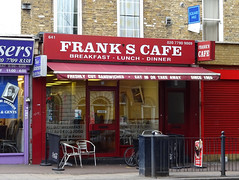 Kake has visited twice now, most recently in January 2020. On a Wednesday lunchtime in February 2017, there were four or five other customers when I arrived a little after 1pm, and music was playing on the radio, not too loud. On a Monday lunchtime in January 2020, there were half a dozen customers when I arrived around 12:30pm, most of whom seemed to be regulars.

In February 2017 the set breakfast with sausage, egg, bacon, bubble, and tomatoes (£5.50) photo was OK but nothing special. The bacon was very salty, and the sausage was low quality. The bubble had lots of cabbage in, which I liked, and it wasn't overcooked either, but as a whole it had an unpleasantly sour taste. The tomatoes were fresh, and hence completely flavourless, it being February (I wasn't offered the option of tinned, and I didn't think to check).

They'd asked me how I liked my egg cooked, and it did indeed come soft, as requested, though I should probably have asked for it runny, as it was slightly more cooked than I prefer. A cup of tea (80p) ordered "very weak" arrived at the perfect strength, and the staff member who delivered it was careful to make sure I was happy with it.

In January 2020 I had egg, beans, sausage, hash browns, and two slices of bread, which along with a mug of tea came to £6.30. The egg and sausage were much the same as last time, and the rest of it was all of comparable quality; that is, acceptable but nothing special.

Service on both visits was fine; efficient and polite without being effusively friendly.

Kake's verdict: It's very handy for Limehouse Station, but not in any way worth a journey.