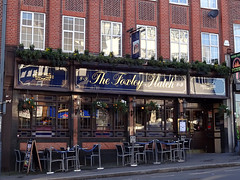 Wetherspoons pub in the middle of a traffic island in Purley.

It's a fairly standard Wetherspoons shopfront conversion, roughly mid-sized for the genre. The ceiling is low, and the open-plan entry space holds a mix of high and low tables. Further back past the bar are four booths.

Kake and bob visited on a Friday afternoon in January 2016. It was quite lively when we arrived around 2:15pm, though there were still plenty of free tables and even a free booth. By the time we left around 6:15pm it was quite full. No music was playing, as is usual for Wetherspoons pubs.

Food is served all day from a chain-wide menu including breakfasts. In March 2017, sausages and mash with peas photo was nothing special, but fine for what it was.

Accessibility: No steps to get in, and there's a RADAR-locked accessible toilet on the ground floor. Other toilets are up a rather creaky flight of stairs with a handrail.