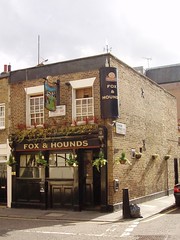 A cosy little pub in a residential area near Sloane Square Station.

This was once a neighbourhood beer house, one of the last to still exist as such since the Victorian era, and is now owned by Young's. It still retains a sense of the residential area it lies in, stretching back into what was once a living room -- or at least, one assumes it was, being dominated by leather sofas and large bookcases (a couple of them with actual books in them, including a good selection of Agatha Christie novels). At the back of the room in an alcove just above the toilet doors, is a little reading desk with a lamp photo, which would be incongruous in any other pub.

There is a small front room by the bar as well, with about three tables. On a sunny day, many people choose to stand outside so it doesn't seem so crowded within.

Being a Young's house, their ales dominate the four handpumps. On a July 2008 visit, these were ordinary, Special (£3.05/pint), Waggledance and Wells Bombardier.

Food is served 12:30pm-2:30pm Monday to Friday only and is dominated by pub food staples (e.g., sausages & mash, ploughman's lunch).