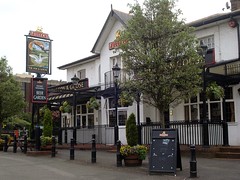 A Fuller's pub and hotel just north of the Hanger Lane gyratory system and attached station.

It's quite spacious inside, and divided into a number of different sections with different ambience. A stone-flagged area around the double-sided bar offers high stools for those who prefer to drink at the bar. Elsewhere, the floorboards are covered with matching rugs of various sizes, and the half-panelled walls are split between olive green and cream. Small jars of flowers sit on the tables. Further back is a tucked-away sofa area, and there's a dining area to one side, with tables set with cutlery and wine glasses.

There's a rather nice beer garden to the rear, split between lawn and patio, with some seats under cover. There are also a few benches out the front for those who want to watch motor vehicles go by at speed.

Kake visited on a Thursday afternoon in April 2011. Four real ales were available, all from Fuller's: London Pride (£1.65/half), ESB, Spring Sprinter, and Royal Wedding. There were quite a few people in when I arrived around 4:30pm, mostly in small groups. Music was playing, generally fairly laid back, and not an overly surprising selection for a hotel bar.

According to the Fuller's website as of April 2011, food is served noon-10pm every day.

Accessibility: Very steep (but short) ramp to get in at the front, basically a smoothed-over fairly high step. There's a path leading around the side to the beer garden, where the pub can be accessed via a smaller step. It's all level once you're inside, and there's an accessible toilet (marked as "accessible WC and baby change").