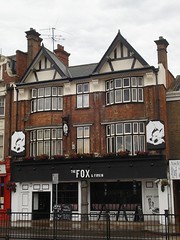 Despite the name this isn't really a Firkin pub any more, but a perfectly good drinking spot for the area (the southern end of Lewisham High Street, closer to Ladywell Station), with lots of space, and a large beer garden out back.

Decor has improved greatly over the years and as of late-2010 sports a variety of largely monochrome decorations, beaded curtains and a few hanging tea pots (to advertise that they have tea available, it would seem, although one doubts this is a big seller). There's a slightly raised stage area at the back (for live music, but at other times it has tables set up on and around it) as well as a prominent DJ booth to the side.

It attracts a largely student crowd (presumably from Goldsmith's College). There's a quiz night on Mondays (which in Ewan's experience is often well-attended, thanks to the large jackpot prizes), live bands on Tuesday (and plenty of other nights of the week as well), and other assorted events. There's a big screen for sporting events, though on the last visit they were showing the football without sound, while a band did their sound check. There's also a pool table, which gets a lot of use.

Its main selling point is that it's a lot cheaper than central London for drinking. Spirits are particularly competitively priced (with drinks specials), and although house wine is not spectacular, it doesn't cost a lot more to get something decent (their most expensive bottle is around £10). After having had a row of six ale pumps for many years without any ale, in 2007 they added Adnam's Broadside and Wells Bombardier (with a guest ale occasionally as well), and which in 2010 offered Fuller's London Pride and Adnam's Broadside as regulars (with Meantime listed on a chalk board, but not on the pumps -- there are bottled Meantime beers available however, for around £3.50). The range of lagers is standard, nothing special, but again there are drinks offers available during the week.