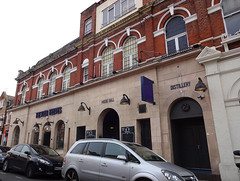 This large building houses several different seating areas on different levels, though plenty of standing room is left free for vertical drinking. A part-covered beer garden is out the back.

The ornate tiling of the bar back is matched by flocked-style wallpaper on feature walls here and there, and the wooden front of the bar itself matched by a hardwood floor and varnished plank-topped tables. Lighting is kept extremely dim, and rather orange for some reason.

Kake visited on a Thursday evening in September 2016. The garden was full when I arrived around 6:15pm, but there was space inside even though the large side room was booked out for a private function. Music was playing, at a level which was OK until the place started to fill up with loud people around 6:30pm, but then became a bit too much on top of the shouted conversations.

All eight handpumps were on, offering beers brewed by the parent company, Laines. A pint of their own American Bitter was £4.20 and tasted fine. The staff member who served me was friendly and helpful, and offered tasters without being asked.

I'd been planning to stay for dinner, as the menu looked fairly interesting, but the place was so dark and noisy that I decided to go elsewhere. According to their website as of September 2016, food is served noon-3pm and 5pm-10pm Mon-Thu, noon-10pm Fri, 11am-10pm Sat, and noon-8pm Sun.

Accessibility: A large step to get in, and several internal steps too; all the ones we saw were lacking handrails.

Kake's verdict: Too dark and noisy for me, and I felt the lack of handrails on the steps was a bit thoughtless. It might be OK in the daytime, but in general I don't think I'm the sort of person this pub is aimed at.